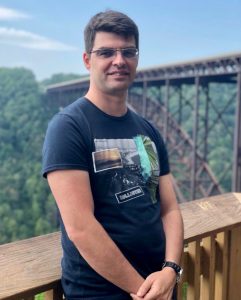 The Schizophrenia International Research Society has named Felipe Gomes, Ph.D., the 2020 Global Schizophrenia Awardee. Dr. Gomes received a B.S. in Pharmacy from the Federal University of Juiz de Fora, Brazil in 2008 before completing his Masters in 2011 and Ph.D. in 2015, both in Pharmacology at the Ribeirao Preto Medial School. He then completed a postdoctoral training in the lab of Dr. Anthony Grace at the University of Pittsburgh. Dr. Gomes went on to become an Assistant Professor in the Department of Pharmacology of the Ribeirao Preto Medical School at the University of Sao Paulo.

country to attend our congress. The award encourages the individual to establish collaborations with other SIRS members and widens the global reach of our research. This year the award goes to a very talented individual from Brazil, Felipe Gomes. Felipe has already discovered important complex relationships in the search for the development of psychosis. These insights are the first step in unraveling the puzzle of schizophrenia development and may produce strategies for protecting individuals, as well as treating the disorder once it has been established. SIRS is building the next generation and Felipe is just one more of those important bricks in our foundations.

A Message from Anthony Grace, Ph.D.

Felipe Gomes is among the brightest, most productive, and most driven young investigators with whom I have had the pleasure of working. Felipe came to my lab on a graduate fellowship for 4 months, and in this short time learned electrophysiology and collected enough data for a first author publication! He returned as a postdoc and added another 12 papers. His work influenced us all, and particularly expanded our interest in developmental risk factors for schizophrenia. Felipe’s work led to his brilliant insight that developmental disruption itself did not “cause” schizophrenia, but instead made individuals more susceptible to the deleterious impact of stress during adolescence. This insight has changed our thinking about this disorder. He has won every award he was nominated for and is now in a faculty position in Brazil where he continues his outstanding work. What impresses me about Felipe is not just his drive for scientific research, but for research that can have a positive impact on the lives of people with schizophrenia and other psychiatric disorders. I have no doubt that we are just viewing the beginning of what will prove to be an illustrious career, and I look forward to the many significant accomplishments that Felipe make in the future.

I feel incredibly humbled and honored to have been named the 2020 SIRS Global Schizophrenia Award winner.
I am an Assistant Professor at the Ribeirao Preto Medical School, University of Sao Paulo, Brazil.

This is my scientific home, where I hope to mentor students for the next generation of Brazilian scientists working on schizophrenia research. My own research concentrates on understanding how certain interneurons in the brain are affected in schizophrenia and how stressful events during adolescence could lead to changes which resemble schizophrenia. My current focus is to determine the developmental pathways to illness vulnerability and risk factors for the development of schizophrenia using animal models. This will help us to identify treatment targets in neural networks that may compensate for, or enhance, resilience. This will be positive step toward identifying schizophrenia vulnerability early by limiting the impact of risk factors and prevent transition to psychosis in susceptible individuals. My path into research would not have been possible without my two incredible mentors, Dr Francisco Guimaraes and SIRS member, Dr Anthony Grace, who continue help me a lot!