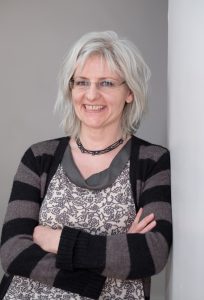 The Schizophrenia International Research Society has named Emmanuelle Peters, Ph.D. the 2020 Research Excellence Awardee. Dr. Peters is Reader of Clinical Psychology at the Institute of Psychiatry, Psychology & Neuroscience (IOPPN) King’s College London, and an Honorary Consultant Clinical Psychologist for the South London and Maudsley NHS Foundation Trust (SLaM), where she is the Director of an award-winning specialist outpatient psychological therapies clinic for psychosis, PICuP (Psychological Interventions Clinic for outpatients with Psychosis), which she set up in collaboration with Prof Elizabeth Kuipers over 15 years ago.

I am delighted to announce the winner of the SIRS Research Excellence Award which goes to a colleague, Emmanuelle Peters. I have known Emmanuelle since her PhD and watched her research with interest. She is the embodiment of the clinician researcher, getting ideas from the research literature which are then modified by her experience with people with lived experience of schizophrenia in the clinic. Her extraordinary contribution is in testing out her ideas in non-help-seeking populations like druids and psychics to understand belief structures and how they might protect against distress. She is modest in the extreme which I discovered in editing her words below. They showed a gratitude to all her colleagues around the world who have supported her or given her ideas for research studies. But this is her prize, and so I have edited her contribution to words about herself alone.

I am so pleased that Emmanuelle has been recognised by the SIRS Research Excellence Award for her pioneering research on the ‘continuum’ approach to psychosis. This is the idea that there is a continuum between health and psychosis rather than schizophrenia being a distinct illness. She was also one of the first to see the potential in studying healthy individuals with unusual beliefs and experiences to understand delusions and hallucinations. What she learnt from her research work was driven back into clinical care. I know I speak for so many people when I say that Emmanuelle has been a huge inspiration and support to me over the years. She receives more Thank You cards from grateful mentees than anyone I have ever met-small signifiers of the enormous impact she has on those around her. She is everything one could wish for in a mentor: rigorous, innovative and pioneering in her research yet with such a warmth, kindness and generosity of spirit. It is an empowering feeling knowing that you have Emmanuelle in your corner and I feel very fortunate to have had her as a mentor.

"I am delighted to be the proud recipient of the SIRS Research Excellence Award, especially as a psychologist; and even more so because I am fundamentally a clinician first, who has done some research along the way. I hope future clinical academics will not need to choose between a research or clinical career – I see the two activities as essentially symbiotic, enhancing each other, an approach exemplified by SIRS."

Since I started in this field, there has been a revolution in the understanding of psychosis and how it is treated. My lens is a psychological one, but I feel we now have a more helpful, biopsychosocial approach.

I have always advocated the continuum model of psychosis which recognises that healthy individuals can also have psychotic-like experiences without necessarily being distressed or needing help. I developed a way of measuring them in the general population (the Peters Delusion Inventory) and investigated what protects individuals with full-blown, persistent symptoms but without a ‘need-for-care’ (the UNIQUE study).

My view is that if you can understand psychotic symptoms psychologically, then you can also change them psychologically. So, I have also worked with those who developed Cognitive Behaviour Therapy for psychosis (CBTp) in research trials but also implemented these sorts of treatments into a psychology-led clinic, PICuP (Psychological Interventions Clinic for outpatients with Psychosis). My next large multi-centre trial integrates trauma-focused CBTp in people with post-traumatic stress and psychosis symptoms which will keep me busy for the next 5 years.