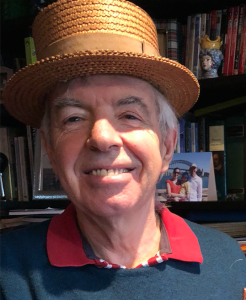 The Schizophrenia International Research Society has named Sir Robin Murray, FMedSci, FRS as the 2020 Lifetime Achievement Awardee. Prof. Murray has been a pioneer in the field of psychosis research, seeking out new ideas and hypothesis and promoting research on epidemiology and environmental risk factors.

A Message From Dame Til Wykes, SIRS President

It is my great pleasure to announce the first of our honorific awards. Others will be announced over the next few months and this one is the pinnacle of our awards – the Lifetime Achievement Award. Our well-deserved winner is Professor Sir Robin Murray from the Institute of Psychiatry, Psychology and Neuroscience at King’s College London. You will understand how much deserved this is when you discover that he was nominated by 16 Professors from five countries. Robin is one of the most highly cited and influential psychiatric researchers and a Fellow of the Royal Society, an accolade given to few psychiatrists. He chaired the Schizophrenia Commission (2011-2012) which reviewed and made recommendation for the care of people with psychosis. In 2011 he also received a knighthood from the Queen for his services to medicine. He has also received many other awards, but I know, from a source close to him, that this was the one he has been the most delighted to receive.

There are many sources of information about Robin – including his Wikipedia page – but I thought I should give a brief account of his research and a couple of personal anecdotes. I also asked Robin to provide a few words of his own just 200. He negotiated me up to 400 and submitted many more. The reason – although this is a lifetime achievement award where you might just look back - he is looking forward to new research to improve the lives of people with a diagnosis of schizophrenia. He is (and remains) a pioneer and has been responsible for many paradigm shifts in his search for the causes of schizophrenia. He started in genetics and developed an interest in environmental risk factors. I remember him probing me about why the onset of schizophrenia happened in adolescence. This topic led to him to be one of the earliest proponents of the highly influential “neurodevelopmental hypothesis” of schizophrenia. More recently Robin has focused his research on the association between cannabis and psychosis and features prominently in the media (and in politics) for this work.

My abiding memory of Robin is my conversations in the Institute canteen. I always enjoyed our spirited, if sometimes mischievous (on his part), conversations. Although this award is to celebrate his career and contribution to schizophrenia research, it is not an end of career award. He continues to debate current research issues; he will be in the Institute canteen with young researchers when Covid-19 allows and he continues to contribute to our whole SIRS community.

Robin’s outstanding quality is as a mentor and that may be his greatest legacy. His passion for science is an inspiration to his students both past and present. Many are now internationally renowned researchers and the majority (possibly 70%) of his psychiatric trainees are now professors in the United Kingdom, Ireland, Europe and even farther afield. In a sense, Robin has created his own longitudinal cohort –a multi-generational cohort of researchers who will keep alive his abiding interest in psychosis.

We all have our memories of Robin – we remember the first time he mentioned us by name in his lectures. We remember his disregard for hierarchies and titles (“Call me Robin”). We remember his genuine interest in our ideas and findings, even as the most junior members of the department. Friendships and relationships were forged in his department that have endured for years. It could be described it as the “Grand Central Station” for schizophrenia research in Europe.

Robin is still a role model and mentor. He still knows our names, still emails us (out of the blue), with a request or a query. No matter how senior, we remain, (in his mind), the same young researchers who came knocking on his door years or even decades ago!

And Robin is still mentoring young trainees, still interested in the new findings on psychosis and still lighting up lecture theatres with his wisdom, humour and enthusiasm. Long may he continue!

Mary Cannon  (on behalf of all “mentees” of Robin, young and old!)

Many complain about the lack of progress in the understanding and care of people with schizophrenia.  However, I disagree profoundly! As a medical student in the 1960s, I spent two years living in an asylum in Glasgow: we students received free board and lodging in exchange for carrying out physical examinations. Most of the 600 patients had been in the so-called “chronic wards” for years, and staff saw their aim to minimise deterioration rather than to facilitate recovery.  Today because of research advances, we are able to have a more optimistic view, though we have some way to go.

The schizophrenia research field has moved forward impressively. The cause of schizophrenia is no longer a mystery. We know that the developmental interplay between susceptibility genes (polygenic risk) and early (e.g. obstetric events and child abuse) and later (e.g. drug use and social adversity) environmental hazards push individuals over a threshold into expressing psychotic symptoms. Most people who receive a diagnosis of schizophrenia can look forward to being free of positive psychotic symptoms, and to live in their home. Great benefit has come from the judicious use of antidepressants and mood stabilisers. The advent of CBT and CRT psychologists has not only brought help to patients but also taught psychiatrists to disregard the anti-therapeutic Jasperian view that psychosis was un-understandable. My sadness is not that we don’t know how to care for people with the schizophrenia syndrome, but rather that because of a lack of finance and enough skilled staff, we don’t deliver the necessary care.

What now? Collaboration rather than competition is essential! We need to upscale and internationalise clinical and epidemiological studies, emulate cardiology and cancer epidemiologists and do studies of hundreds of thousands of patients. We should redouble our efforts to trace the biological and psychosocial pathways between risk factors and the manifestation of symptoms; molecular imaging will be crucial in this. We need to clarify whether prolonged antipsychotic use results in dopamine supersensitivity and ultimately treatment resistance. We also need to try much harder to get our patients to trust us – anyone who thinks they do already should look at websites such as “Mad in America”. We could start with championing the view that poor outcome in schizophrenia reflects poor care rather than an intrinsic aspect of the syndrome.

Importantly, we need to move towards a public health approach to avoiding exposure to risk factors. My worst nightmare is that the commercialisation of ever more potent cannabis will lead to an increase in the psychosis incidence. If this can be avoided, then I regard the future for our patients as bright. By the end of this decade, I expect that our understanding will have developed sufficiently so that we will have abandoned the stigmatising term schizophrenia in favour of aetiologically based diagnoses and meaningful formulations; and we will have a range of more specific pharmacological and psychosocial interventions tailored to individual need.